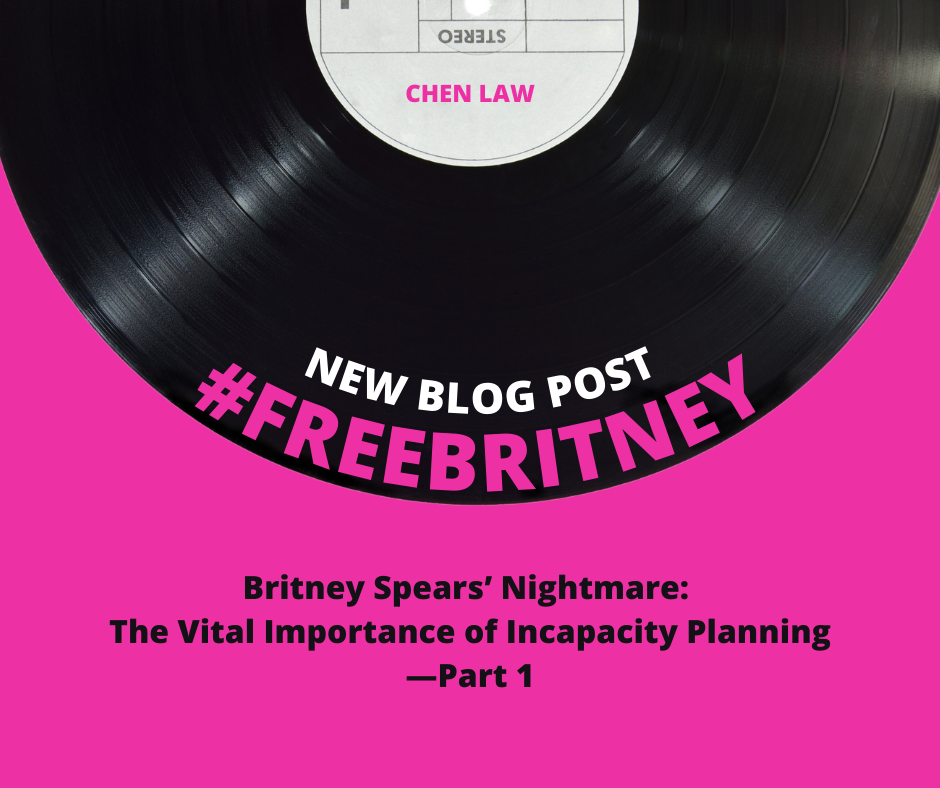 Since the age of 16, when she burst onto the charts with her debut single, “...Hit Me Baby One More Time,” Britney Spears has been one of the world's most famous and beloved pop stars. Yet despite her massive fame and fortune, Britney, who is now 39, has never truly had full control over her own life.

As most familiar with pop culture know by now, Britney has been living under a conservatorship for the past 13 years. Also known as “adult guardianship,” a conservatorship is a legal structure in which the court granted Britney's father, Jaime Spears, and other individuals nearly complete control over her legal, financial, and personal decisions. The conservatorship was initially established in February 2008 after Britney suffered a mental breakdown, which resulted in her being briefly hospitalized.

A Total Loss of Control
Back in 2008, the court appointed Britney's father and attorney Andrew Wallet as her co-conservators, as Britney was deemed mentally unfit to care for herself. The arrangement was only meant to be temporary, but in October of that year, the conservatorship was made long-term, and her father has remained in nearly complete control of Britney's life ever since.

Under the conservatorship, Britney's father has the power to restrict her visitors; he is in charge of arranging and approving her visits with her own children; he has the authority to make her medical decisions; and he has the final say in all of her business deals, including when she works, and the complete authority over all of her financial matters.

As it stands now, Britney's current mental-health status remains unclear, and we can't be sure whether or not she still requires someone to help her manage her financial and business affairs. But what is abundantly clear is that given the chance, Britney would have undoubtedly preferred to have some say in not only who should be in charge of making decisions on her behalf during her incapacity, but also how those decisions should be made.

Yet because Britney did not create legal documents indicating who should make decisions for her if she could not make decisions for herself, a judge decided for her—and as you'll read below, this has resulted in immense trauma for Britney and destroyed her relationship with her father. With this in mind, here in this series of articles, we will first discuss the latest details on Britney's conservatorship and the impact the arrangement has had on the pop star's life and career. From there, we'll discuss how you can prevent something similar from happening to you and your loved ones using proactive estate planning and our Family Wealth Planning process.

Years Of Abuse And Conflict
Although there has been widespread speculation that Britney's conservatorship was abusive, the exact details of her conservatorship have been kept private. Moreover, until very recently, Britney had never spoken publicly about her life under the arrangement.

However, two shocking developments within the past few weeks finally revealed just how much Britney has suffered under the conservatorship and how she has fought unsuccessfully for years to regain control of her life from her father. The first was a report published by the New York Times on June 22. https://www.nytimes.com/2021/06/22/arts/music/britney-spears-conservatorship.html]

According to confidential court records obtained by the newspaper, Britney had expressed serious opposition to her conservatorship as early as 2014, and on multiple occasions, the pop icon pushed for her father to be removed from his position. The very next day in a public court hearing on June 23, Britney finally broke her silence, and what she described was stunning.

During an emotional 24-minute speech delivered via Zoom, Britney pleaded with Judge Brenda Penny to end the conservatorship under which she claimed she has endured years of abuse and exploitation, including having to take a powerful mood stabilizer that makes her feel drunk, being compelled to work while seriously ill, and being forced to remain on birth control, so she can't have more children. (Read a full transcript of Britney's testimony) https://variety.com/2021/music/news/britney-spears-full-statement-conservatorship-1235003940/

In response, Britney's father vehemently denies any wrongdoing and insists he's acting in his daughter's best interests. In fact, a few days later, his lawyers filed a petition requesting the court investigate Britney's allegations of abuse. According to the petition, if Britney's claims prove true, then “corrective action must be taken,” and if not, then the conservatorship “can continue its course.” https://www.vulture.com/2021/07/britney-conservator-jodi-montgomery-rebukes-jamie-spears.html

A week later, Judge Penny denied Britney's request to remove her father as conservator. However, the judge's ruling was only in response to a filing by Britney's lawyer made in November 2020 to have a wealth management company, Bessemer Trust, take over as sole conservator, and was not in response to Britney's impassioned testimony. As it turns out, Britney's court-appointed lawyer, Samuel Ingham, has yet to file a formal petition to terminate the conservatorship, but the judge said she would be open to such a filing.

According to CNN, Britney has since instructed Ingraham to immediately file the necessary paperwork in order to formally terminate the conservatorship once and for all. If filed, the judge could rule on Britney's petition and her father's request for an investigation in the next court hearing on the conservatorship, which is scheduled for next week on July 14.  https://www.cnn.com/2021/06/29/entertainment/britney-spears-begging-attorney-end-conservatorship/index.html 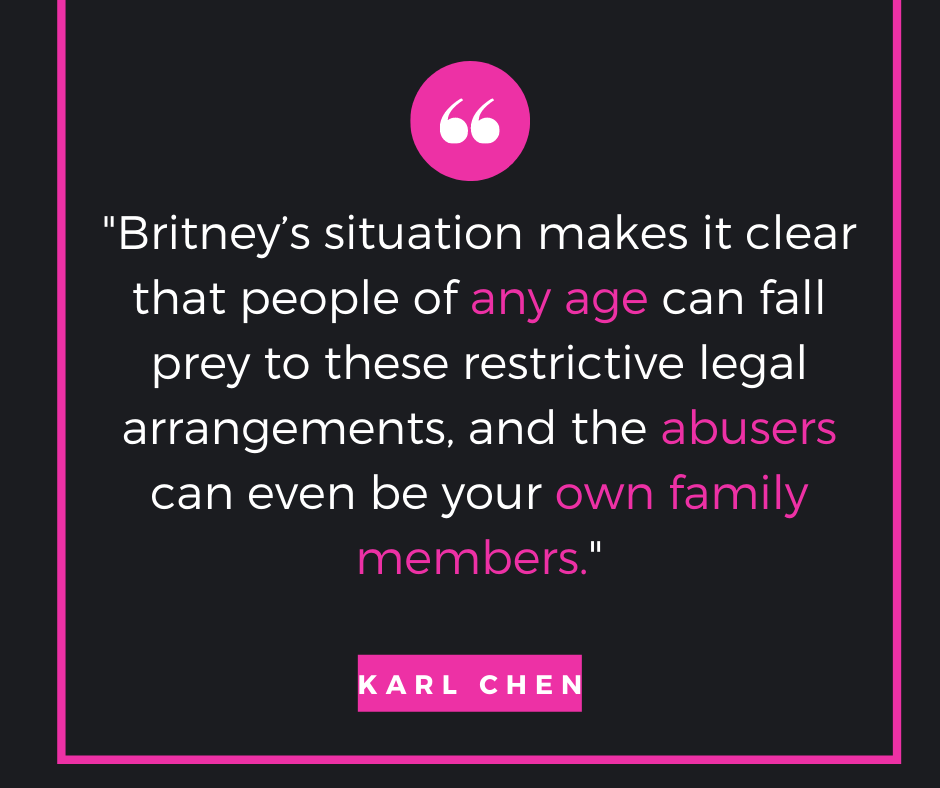 A Broken System
Britney's story highlights the real potential for abuse that exists within the conservatorship and guardianship system. In fact, as we've covered in previous articles, there have been dozens of highly publicized reports in recent years involving corrupt professional guardians, who exploit those under their care for their own financial gain. Yet, in those cases, the victims have nearly all been elderly, and their abusers were strangers. But Britney's situation makes it clear that people of any age can fall prey to these restrictive legal arrangements, and the abusers can even be your own family members.  BLOG FROM 9/6/19

Furthermore, and perhaps the most puzzling part of the whole situation, is why someone as young and active as Britney is still living under a conservatorship. Conservatorships and guardianships are typically used to protect the elderly and mentally disabled who are incapable of making their own decisions and caring for themselves, and they often remain in effect until the person dies.

Although Britney may have initially needed the conservatorship to protect her from her own poor decisions and others looking to take advantage of her in the aftermath of her breakdown in 2008, since then, the Grammy winner has worked almost nonstop and earned millions of dollars. In fact, over the past decade during which she was deemed “incapable of making her own decisions,” Britney has released four albums, headlined multiple world tours, performed nearly 250 shows in a Las Vegas residency, and served as a judge on the TV show “The X Factor.”

That said, due to the private nature of her conservatorship and the fact that Britney has never fully disclosed the specifics of her diagnosis, we don't know the full circumstances of her mental health. Although there have been rumors and speculation that Britney is suffering from bipolar disorder, this has never been substantiated, and her medical records are sealed.

What's more, although it was reported in 2019 that Britney checked herself into a mental health facility and was prescribed lithium, an older medication that's used to treat bipolar disorder, according to court records obtained by the New York Times, this wasn't entirely true. In 2019, Britney testified that she was forced into the facility against her will, and during her most recent testimony, she told the judge that she was forced to take the lithium against her wishes as well.  https://www.nytimes.com/2021/06/22/arts/music/britney-spears-conservatorship.html

In the end, if Britney does petition to terminate her conservatorship, she will need to prove to the court that she currently possesses the capacity to handle her own life, health, and financial choices. In order to do this, however, Britney will almost certainly have to undergo another mental health evaluation, which would likely involve a court hearing and testimony from mental health professionals.

In an interview with the culture and music website Vulture, Tamar Arminak, a conservatorship attorney who worked on a similar conservatorship involving 27-year-old actress Amanda Bynes, said that the process to prove Britney's capacity would likely involve a “mini-trial” to determine whether the conservatorship continues to be in the singer's best interest. https://www.vulture.com/2021/06/britney-spears-petition-to-end-conservatorship-guide.html

“You have to present evidence and show a changed circumstance,” said Arminak. “You will have to have testimony from doctors, psychiatrists, therapists, and witnesses who will testify for you that you shouldn't be under this conservatorship.”

Unfortunately, undergoing yet another mental health evaluation is something Britney is hesitant to do. Indeed, in her recent testimony, she made this point clear. “I truly believe this conservatorship is abusive… I want to end the conservatorship without being evaluated,” Britney told the judge.

According to Vanity Fair, a source close to Britney said the reason for Britney's reluctance to undergo another mental health examination is due to the fact that she has had such poor experiences over the years with the doctors hired by her father. https://variety.com/2021/music/news/britney-spears-full-statement-conservatorship-1235003940/

"She doesn't have much trust for the doctors that she has worked with so far," the source said. “She feels like they have failed her.”

The source went on to say that Britney's reluctance to be evaluated is also one of the reasons her lawyer has yet to formally file the petition to end the conservatorship. After her past experiences with mental health professionals, it's understandable that Britney would be hesitant to trust yet another doctor hired by her father or appointed by the court.

However, if Britney wants to finally be free and have full control over her life, that might be the only choice she has.

Whether it's mental illness, age-related dementia, or a serious accident, we are all powerless to prevent the potential for incapacity. However, with the proper estate planning, you can at least have control over how your life, healthcare, and assets will be managed if something does happen. Moreover, such planning can also prevent your family from enduring the bitter conflict and expense that can result when you leave control over your life in the hands of the court like Britney did.

Working with us, your Personal Family Lawyer®, we can put an array of estate planning vehicles in place that would make it practically impossible for a conservator or legal guardian to ever be appointed—or even need to be appointed—against your wishes. In part two, we'll outline those options in more detail, but to learn more, contact us today.

We'll continue with part two in this series on Britney Spears' conservatorship and how you can avoid the potential for abuse, conflict, and expense of court-ordered conservatorship using estate planning.

*This article is a service of Karl L. Chen, Esq., Family Business Lawyer™. We offer a complete spectrum of legal services for businesses and can help you make the wisest choices on how to deal with your business throughout life and in the event of your death. We also offer a LIFT Start-Up Session™ or a LIFT Audit for an ongoing business, which includes a review of all the legal, financial, and tax systems you need for your business.

MY STORY – Estate Planning and Business  Attorney serving Maryland and Washington, D.C. I began my law career at the U.S. Securities and Exchange Commission in Washington, D.C., after seven years as a financial services professional. It was an incredible experience. . .

Thank you for contacting us. We will get back to you shortly.

Please complete all required fields below.